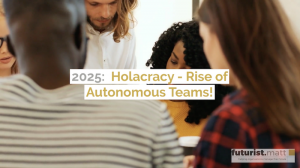 Traditional hierarchical structures lack the responsiveness required in an era of accelerated technological and social change. Lessons from history demonstrate how firms such as Philips Consumer Electronics were killed off by Samsung because of a laid-back investment approach and slow decision making. Another example being Kodak who filed for bankruptcy due to a lack of innovation and the growth of smartphones.

Faster change requires new ways of working. Step forward the growth of Self Organising teams. ‘Holacractic’ teams have greater autonomy over how they govern themselves, including distributed decision making amongst members. The major advantage being to 'increase agility, efficiency, transparency, innovation and accountability within an organisation.' That said, this style of working isn’t without its critics. Leadership guru Steve Denning is known for negative claims about Holacracy poster child, Zappos. Far from removing hierarchy, decisions are simply pushed from one team to another.

“Holacracy is a method of decentralized management and organizational governance trademarked by HolacracyOne, in which authority and decision-making are distributed throughout a holarchy of self-organizing teams rather than being vested in a management hierarchy. Holacracy has been adopted by for-profit and non-profit organizations in several countries.”, Wikipedia

As we look East towards China with its continued ascendancy on the world stage, we see positive evidence of Holacractic principles in action. Consumer electronics firm Haier have even moved beyond principles of self-organising teams towards ‘Entrepreneurial Microenterprises’. In addition, the E-Commerce giant Alibaba is known for its lack of formal innovation process and teams that organise themselves around projects rather than hierarchies.