Living in a Borderless World

Living in a Borderless World 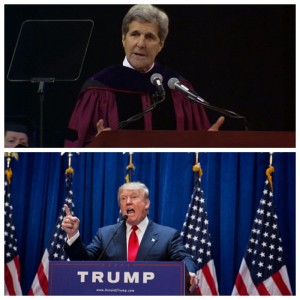 “The future demands from us something more than a nostalgia for some rose-tinted version of a past that did not really exist in any case. You're about to graduate into a complex and borderless world.” (US Secretary of State, John Kerry).

These were Kerry’s words in his commencement speech to this year’s Northeastern University graduates. The context, unfortunately, was his views on the dangers particularly of borderless terrorism, but his comments were a pointed barb against Republican presidential candidate, Donald Trump, who presents a more isolationist view of the world and its challenges: “I will build a great wall – and nobody builds walls better than me, believe me – and I’ll build them very inexpensively. I will build a great, great wall on our southern border, and I will make Mexico pay for that wall. Mark my words.”

The reality is we live in a Post-Westphalian age, in which borders are more porous. The evidence of this is not incontrovertible: the barriers springing up across Southern and Eastern Europe (for the first time since the Second World War) in response to the middle-Eastern refugee crisis suggests that borders are protected like never before. But the Westphalian model is about authority; and people’s sense of belonging or the validity of institutions which exert power over them is becoming less meaningful. And then there are our virtual borders, which have to all intents and purposes evaporated completely. Technology is enabling the rise of a global citizenry in ways we couldn’t comprehend even 10 years ago.

How many of us live in one place, but work in another, or travel to different places as a matter of routine? How many of us work in virtual teams? Teleconferencing, Skype and other ubiquitous communication tools make collaborating with colleagues across the world straightforward (though not always necessarily comfortable). I regularly use Skype video to collaborate with team members in China when working on new PitchPack products. Very soon, that’ll be VR technologies such as Oculus Rift which will enable me to examine new product concepts from every angle, perhaps even involving haptic sensors to enable a sense of look and feel. VR will not only facilitate dispersed office environments but also allow teams to ‘go anywhere’, for example to a manufacturing facility to really get a feel for what’s happening on the ground.

Companies are beginning to close physical offices completely. Indeed, one US headquartered software company (name anonymised), strategised in 2014 of how it would 'consolidate office facilities' to 'expand work from home'. This lead to a substantial percentage of staff doing exactly that. Of course, we’ve been here before: companies like US ad agency Chiat Day were at the forefront of hotdesking: saving money on facilities by owning only the resources necessary to house an average number of people at any one time. It has had its downsides: employees used their personal Post-It notes and cactus on the desk felt alienated. But improvements in technology and the cultural norms of the Millennial generation, happy to work with a laptop and nothing else, are making the ‘anywhere economy’ a reality. In 2010, the natural incubation environment of a startup was the local Starbucks. In 2016, startups are not only incubated in a coffee shop, but built by developers in Ukraine and Venezuela.

If you’re reading this, I bet you’ve used the ‘Google Translate’ service, started back in 2006. Originally text based, it now supports speech, images and real-time video through a range of interfaces, particuarly our smartphones. Google, Microsoft (Cortana) and Apple (Siri) are betting big on spoken interfaces, and it’s entirely natural that they should seek to eliminate the complexity of foreign languages, too – especially as they also have billions of reference sentences provided by consumers to build algorithms around.

Skype’s Translate service, for example, will take a creditable stab at voice and video calls in seven languages and instant message texts in 50! Real-time translation will soon melt away language as a barrier. The “Universal Translator”, as seen in Star Trek, is a little more challenging because translation needs context. Say ‘Kick the bucket’ to an English person and they’ll know that you mean ‘to die’. Translate that into Mandarin, and a Chinese person will take it literally – with presumably amusing consequences. But that’s not stopping a raft of companies from having a go. The Waverly Labs Pilot - which bears a remarkable resemblance to the Babelfish of “Hitchhiker’s Guide to the Galaxy” fame, is kicking up a stir on the IndieGoGo crowdfunding platform, and is apparently due to ship later this year.

make language a fertile ground for breaking down the borders between humans wherever they may be.

There’s no doubt it’s getting easier for people to transact. For the average consumer, online payments have never been easier. Apple Pay (and Android Pay which is rolling out as I write) have pushed contactless spending above £1.5bn per month for the first time, according to the UK Cards Association.

That said, it can be tiresome for businesses making occasional cross border payments. In particular, traditional banks have rested on their laurels for far too long, extracting profit from the ignorance of the ordinary and ill-informed consumer. Transferwise, one of the few British ‘Unicorns’ (businesses valued at over $1bn) is a good answer to this problem, facilitating simple peer-to-peer cross-border money transfers.

Added to the challenge of a lack of expertise, currency devaluations can add to problems. In Russia, in 2014, for example, crashing oil prices and political instability saw the Ruble tumble. Intriguingly, the reaction of many people – especially the country’s enormously tech-savvy youth – was to invest (or protect value) in Bitcoin. Bitcoin is the poster child for so-called ‘Cryptocurrencies’, currencies that are not tied to a specific sovereignty. They do away with hefty transaction fees and render obsolete the rules and regulations around transfers. There are huge risks with Bitcoin – if nothing else, the liquidity of the Bitcoin marketplace is completely unproven. But even if Bitcoin is a trailblazer which ultimately fails, the identity and transaction authority technology which underpins it, Blockchain, has attracted the interest and investment of many banks, including Barclays, BBVA, Credit Suisse, JP Morgan, State Street, Royal Bank of Scotland and UBS.

These are just a few examples of the new globalisation; giving individuals access to a world without borders. We can speak, make money and market ourselves without considering location, national loyalty or any other traditional constraint.

I’ll leave you with a final thought. NASA says we could colonise the moon as early as 2022. With the convergence of solar power, on-site 3D printing and ice already stored in craters (hydrogen fuel and water), perhaps the moon will become the first stopping off point in a borderless world becoming a borderless universe?