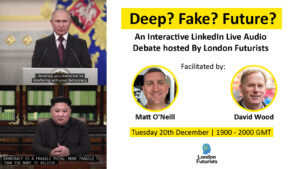 Imagine a world where nothing online can be trusted. We're reaching that dangerous crossroads, fast.

Machine-generated content creator tools are at the heart of 2022-3's zeitgeist, but are sparking intense debate. Some speculate OpenAI's 'ChatGPT' natural language processing tool represents the death of school essays, or will put people from programmers to copywriters out of work. ChatGPT is certainly incredibly popular: when Facebook launched, it took 10 months to gain its first million users. By comparison, ChatGPT took just 5 days.

But there is a darker side to this digital creativity. The anti-corruption campaign group 'RepresentUs' used tools like 'Deepfacelab', one of many freely available 'deepfake' video manipulation tools to create ad campaigns illustrating 'how easy it is to collapse democracy.' Their videos featured a fake Vladimir Putin and Kim Jong-Un - and were so realistic that despite on-screen disclaimers, the ads were pulled by the TV networks for fear of how the American people might react. They were never aired.

The fear of the TV stations is justified. It's obvious we're reaching a crossroads where anyone will be able to instruct computers to create any static image or video they want by simply asking for it - and get an entirely credible result. And as these simple-to-use yet refined systems for visual manipulation become available, we can expect the take-up to be just as explosive as that of ChatGPT.

We are no more than a couple of years away from a scenario where almost nothing online can be trusted.

- How will Social Media networks, governments, businesses and parents even deal with a torrent of falsehood?
- Can Neural Networks and Machine Learning deliver the tools to create a safe harbour of veracity that is anywhere near as effective as the content creation tools themselves?

This is an urgent future issue and we need to get in front of it - immediately.

Join David Wood and Matt O'Neill for a live LinkedIn audio event where we debate and discuss the issues together. This is a discussion where your views will be welcomed!

Here is the complete archive taken from the event:

It was very engaging!